Hey everyone!  I don't know if anyone still checks this, but I just wanted to throw out a random update that I went back to school and am working on a BA in Arts Management. I am in the middle of my last semester before I graduate - and I'm exhausted!  But also.... I have a new business!!!  :)

I am now an officially insured and professional face painter in Pittsburgh and the surrounding areas!  I had been working for a woman painting faces and drawing henna at local renn faires.  A few years later, I've started my own business, Halfmoon Body Art.
You can like me on facebook: https://www.facebook.com/HalfmoonBodyArt
You can also follow my new website: http://halfmoonbodyart.com

If any one here would like to hire me or recommend my services to anyone within driving distance of Pittsburgh, PA please don't hesitate to throw them my way!!  I do all kinds of events: Birthday Parties, Mitzvahs, Corporate Picnics, Festivals, Bachelorette Parties, Church Bazaars, etc. (I even have a punny joke as my tagline - "The most fun you'll have is only One Stroke away!"  Get it? Because we use one-stroke painting.  ....okay, I'll work on it.)
Don't worry... I still have all of my polish and look forward to making more time for nail art once school is mostly over, but for now I have to keep studying and finish this leg of my journey. Happy Polishing, you all!!
Posted by Unknown at 12:02 AM No comments:

A little late... but late is better than never!

..Well, I guess that depends on what we're referring to, doesn't it?

In this case, I'm talking about a post featuring an edible craft that I threw together a couple years ago.  (Two Easters past, to be exact.)
I saw these originally on a geek-focused retail website and I knew that I had to have my own.

I bought the generic molds - same that they used - the candy melts, the coloring (well, actually, I had that left over from the Birds cupcakes), and tossed them all in a magic carpet bag, yelled "accio!", and BAM!  They flew right out onto my kitchen counter looking JUST LIKE THIS! 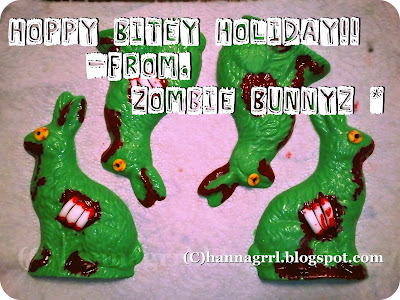 (Manic exaggeration is manic.)
Posted by Unknown at 12:47 PM No comments:

Where do I begin?
Anyway, thanks for reading.

Posted by Unknown at 9:57 AM No comments:

Although there is some contentious debate on the use of the term "irony" in the song, I shall use it here to denote the fact that I am anti-Ed Hardy, and yet here I am with "tattoo inspired" products... which may not be ironic, but it is definitely silly, isn't it?

Yes, I'm publicly revealing in a (very tongue-and-cheek) shameful way that my nails currently match my lighter.  [No judgements on my smoking habit. If you've never smoked you have no idea how hard it is to quit.  Fact.] 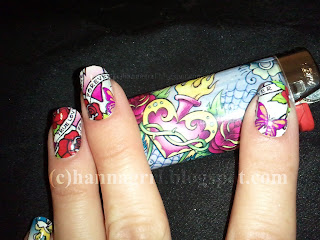 And it's a review.  Holy crap, right?

I was a little dissapointed in Austin-tatious.  It's one of the most beautiful and lusty turquioses in the bottle.  On the nails?.... *5* coats to bottle opacity!!!   Yes, 5.  I guess I was so charmed by Catch Me In Your Net... I was expecting (hoping?) for something on par. (*Raw pics because Picasa and Picnik are being weird)
Also, and this is slightly not as much of a BFD, but there's a slight purple duochrome in the bottle that just does not totally translate to the nail.  No big, but still.... *sad panda face*

On the bright side, I bought Austin from Amazon as part of a two-pack with Black Shatter for only $10 and some change.  Such a steal that I caved and splurged on Silver Shatter from the same seller (another $7).  S&H was $2.31/bottle... I want to suggest that maybe she could have combined shipping a little bit, but I'm not really going to complain.  My order total was only $23.80.


I will say this though... If you have an extra bottle of Catch Me In Your Net laying around and would like to get your hands on Austin-tatious (Swatched Once!)... please, feel free to contact me.  Swapping now!   :)
Posted by Unknown at 12:47 PM No comments:

I'm wearing an official jersey for the very first time.  Yeah I know... I've lived in Pittsburgh for almost 28 years and have never worn a single jersey???!  Yes, I might be slightly retarded.  (But that's a whole 'nother post!)  In fact, I'm so out of the Enthusiasm Loop that my jersey was bought *for* me (not *by* me) at the Goodwill and it's of a player that hasn't been a Steeler since 1997.  Thigpen, anyone?

Anyway.... we're having a pizza party at work and I thought that for the sake of fitting in I'd sport the jersey... and of course - paint my nails!   (In fact, my favorite part of today has been showing people my nails saying, "See!  Even my middle finger has The Spirit!" but really just flipping them off.  I know, I know, I'm terrible.) 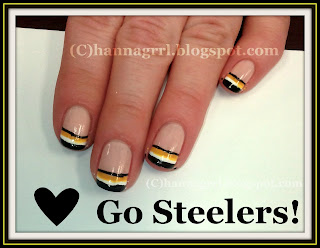 Pardon the mess... I just wanted to make sure that I posted these pre-game.  You know, before I get too distracted ["drunk"] to redo them.  ﻿
I'm secretly supersitious, so I hesitate to show any Team Spirit for fear that if I do it'll subsequently *screw* our team's chances at a win.... Well, this year I just can't help myself.   So when the Steelers lose, it will be my fault.  You can all blame me.
Posted by Unknown at 2:24 PM 1 comment: 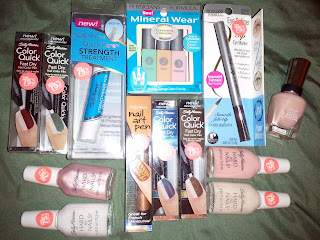 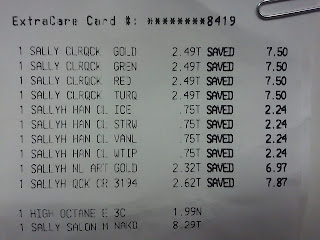